Surely you will drink coffee better at Polish gas station than in any of thousands of German cafeterias. However there is no reason not using opportunity of fairs in the city and spring aura and walking about on the little Frankfurt streets.

„Frankfurt am Main is just a stopover for many. Others see it as a place to work – one big office block with thousands of doors anf lifts. For most of us, Frankfurt is nothing more than a place where people stop, stay overnight, change connections, meet up, and do business. Statistically, Frankfurt’s population is renewed approx. Every 15 years. (…) Frankfurt is actually a small city. Some even dismiss it as ‚a small village near the airport’. To a large extend, the airport is the lifeblood of the city. A plane arrives or departs here every minute. It’s not its size but its many activities that give Frankfurt the air and the flair of a large city. You will not find so many euros, dollars, Swiss francs or yens per square metre anywhere else in Germany. There is a bank or insurance company everywhere you look. Banks are like shrines. The religions are Deutche Bank, Commerzbank, Citibank and BNP. If there was a fifth, they would correspond to the world’s major monotheistic religions. You only have to walk into a bank to feel their power and your insignificance. These buildings make up Frankfurt’s distinctive skyline similiar to Manhattan. This has earned Frankfurt the nicknames ‚Mainhattan’.” (tekst by Janusz L. Wiśniewski).

But not skyscrapers or cafeterias were the purpose of my walk but the oldest part of the city. Late evening, coincidently, just before the closing I approached to the minster. There lasted a show in the convention of ‚light and sound’ (sic!) While in Bologna for instance on the occasion of the Cersaie fair, illumination with the music fit to the surrounding of old houses and renaissance palaces. Here it was totally different … RGB LEDs illuminate Christ gazing at the flickering wheels, dots and other patterns in all colors of the rainbow and rocking on the cross in the rhythm „look on the bright side of life” … this is not like that dear colleagues. Visually attractive but stupid happening. 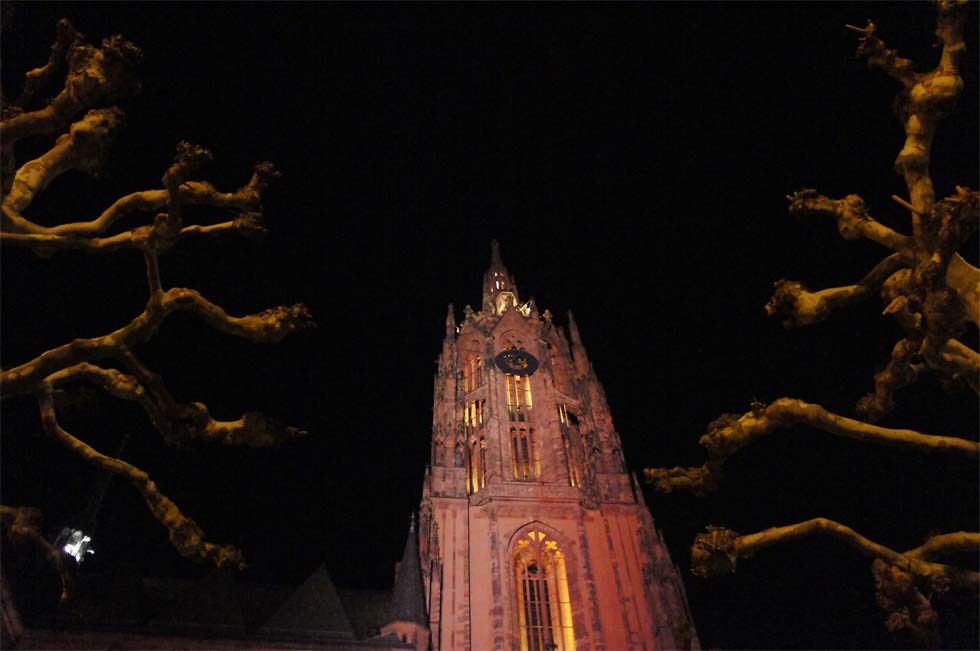